Today, TVR announced a new funding and technology partnership with leading lithium innovator Ensorcia. But should you be excited?

There has been much uncertainty about the future of TVR for some time now. It’s been 4 years since the launch of the new V8-engined Griffith, designed by legendary Formula 1 designer Gordon Murray. However, since then there has been very little, if any, communication about the company’s future.

TVR enthusiasts could only presume the worst and the online discussion shifted towards speculation. Is this the end of TVR? Will we ever see the new Griffith on the road? If you won the Euromillions would you save TVR? Can they even be saved?

Well according to Les Edgar himself, TVR can be saved, and this new partnership is a ‘milestone in our mission to rejuvenate and futureproof our iconic British brand’.

But don’t celebrate too early because it looks like the partnership will provide significant funding for the formation of a joint venture in the electric vehicle space. Silent TVRs! Peter Wheeler will be turning in his grave. I suppose we’ll just have to embrace the change.

The production development of the V8-engined Griffith will however receive funding, so there’s one soundtrack to look forward to. It is worth pointing out however that the construction of TVR’s new factory, the Ebbw Vale facility, is still in its early stages. So the new Griffith might not be so “new” by the time it’s all finished.

So a new trajectory for TVR in the form of EV. Is it time to say goodbye to the loud gas guzzlers that we all know and love? I hope not. 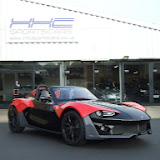 HHC Sportscars
36 Google reviews
Tim Wilson
HHC is the only place l will take my '93 Chimaera for routine servicing and other maintenance/repair. I've been using their expertise and experience since l got my car in 2009. They communicate clearly and frequently about any work undertaken when the car is with them, and options involving varying degrees of expenditure are always weighed up and advice given (and taken) accordingly. A typical case is work done by HHC this week (Nov '21) on my Chim's weakening exhaust manifolds; the exhausts were blowing. Richard and the team made great effort to extricate the manifold bolts - with success! - and this saved me money, as the cylinder heads didn't have to come off. Thanks, chaps.👍 One other nice thing is that my car has always been cleaned and polished, every time l go to pick it up from HHC! My recommendation? Always go to HHC for your TVR needs: they're tops.
Read more
James Gray
Excellent service on my Lotus Elise, the attention to detail is amazing. I had a number of things wrong including the head gasket and they got it all sorted in time for a track day I had booked. I will be going back to HHC. Thank you
Read more
Kevin Gray
Parts for TVR very reasonable. Friendly staff willing to help and give advice
Read more
Ronnie Skimming
Friendly staff, did a fantastic job on car. Happily recommend
Read more
lewis smith
Read more
Ciaran Owens
What these guys don't know about TVRs isn't worth knowing. They are superb, stand behind their work, will do their best to look after you and will maintain your car to the best standard possible. Their 12k service has just left my Chimaera feeling absolutely factory fresh.
Read more
Jill
Read more
Clive Harding
Excellent
Read more
Richard Blackburn
Very knowledgeable staff and a great range of cars.
Read more
Diane Gibson
Excellent service, very professional and friendly.
Read more

PART OF THE TVR NETWORK